The readers of UK’s CLASSIC BOAT magazine have voted for Ocean Refit’s restoration of S/Y TERN as the runner-up in “Best Restoration of the year” category of their prestigious annual awards!

Tern was one of seven nominations, all of them very worthy restoration projects of classic boats. The full list of nominations was:

Congratulations to Tecnomar and Enrico Zacagni, whose thorough restoration of the stunning 10m class, MARGA, won the first prize! 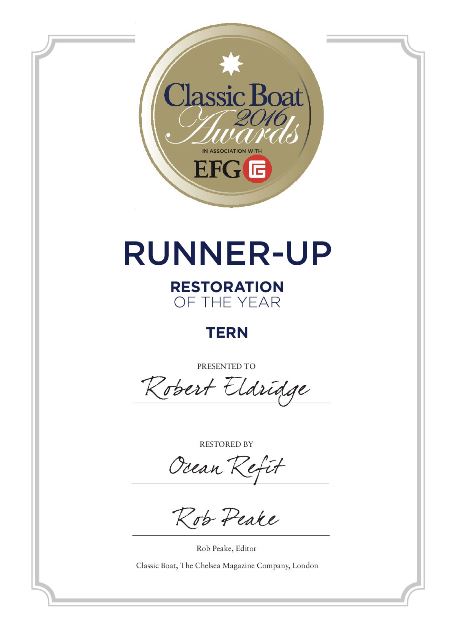 After many hours of work, and a huge commitment from all involved, we’re delighted to announce the successful re-launching of yacht “TERN”.

TERN was moved by low-loader from her shed where she has spent the past 18 months undergoing a thorough restoration, to the Club Nautico de Santa Ponsa, and entered the water again at 8pm on Monday 20th April 2015. And an auspicious date it was! One hundred and eighteen years ago practically to the day of TERN’s original launch!

Local historian Patricia O’Connell uncovered an article from the Belfast News-Letter of April 1897, which gave the original launch date as Monday 19th April 1897. Falling on a Sunday we picked the closest date, Monday the 20th, for TERN’s launch. A huge last push to achieve this date was made by all the Ocean Refit team and contractors, and I extend a big “thank you” to all involved for the remarkable hard work and dedication.

First indications are very positive. After spending one night in the slings of the travel-lift, not a single drop of water came in! Allowing for the weight of the mast, still to be stepped, spars sails and gear still to come on board, she floats where she should, slightly high at the bow and just above her intended LWL. Engineless, as original, she was towed on the morning of the 21st by the marineros of the Club Nautico, to her new mooring, and she moved along effortlessly. So much so that as the driver of the launch turned her around to push her stern to into her mooring, he called out to his colleagues “cuidado es una bala!” “Watch-out, this one’s a bullet!”

One year on from starting on Tern’s restoration and today we cross another milestone in this project, by reinstalling the ballast keel. The cast iron ballast will bed onto the original English Elm wooden keel, one of the few parts of the centreline structure to have survived the test of time. We have new wrought iron keel bolts, made by Topp & Co in the UK sealed in epoxy paint. The keel has been bedded onto barge felt soaked in pitch, a good smothering of white lead paste, and a few turns of hemp fibre around the bolts, should stop  water ingress. 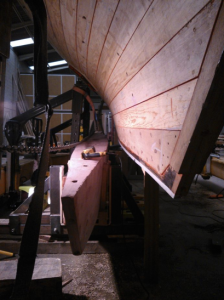 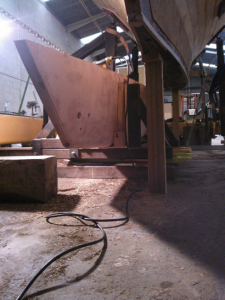 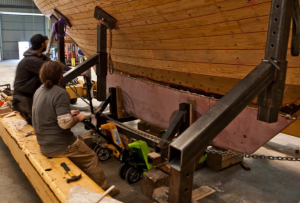 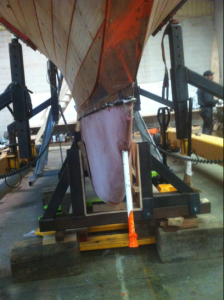 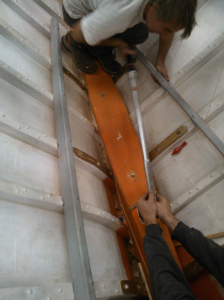 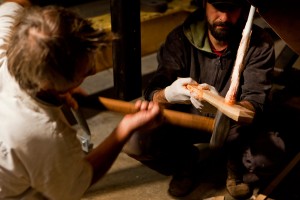 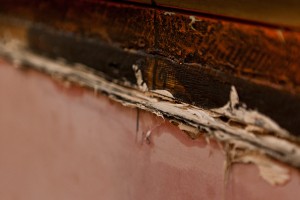 Tradition has it, that during the build of a wooden boat, when the last plank of the hull is bent in, all involved in the project mark the occasion with a celebration. The hull is planked from the “garboard” up and consecutively from the “sheer” down and the final plank, the “shutter plank”, so called as it closes the hull, marks a turning point. For the boat-builders the laborious process of planking and copper riveting is over, and the work of deck, cabin and interior will begin. For the vessel’s buyer, finally her lines can be admired, and launch day envisaged. Well we’re restoring TERN not building her, and we’ve left every original part possible, but to be completing the work on the hull and fastening in her last plank, is no less of an occasion. The shutter plank is colloquially known as the “whisky plank”, for the most important part of the traditional celebration is that a dram of whisky be had by all. And who are we to break with tradition……

This beautiful Olin Stephens classic has gained considerable fame over her many years of regatta racing with great success including winning the 2013 TRANSPAC race. This hard campaigning inevitably took its toll on Dorade and the topsides were faded with plank edges and caulk seams showing.

Sanding with longboards in the heat of the Mediterranean August is no easy task, but our team got stuck in and left a re-faired yacht ready for a high-gloss finish with gold-leaf cove stripe to add the finishing touch. Dorade was faired, painted and ready to go again in a quick 3 week turnaround.